The territory surrounding the Hotel Ristorante alPonte is distinguished by a great variety of landscapes, from the Collio hills to the sea with the lagoon of Grado and Marano, as far as the Gulf of Trieste.

Internationally known centres of historic and artistic importance such as Aquileia, Palmanova or the old Forum Iulii, now Cividale del Friuli, are only some of the pearls of Friuli Venezia Giulia that are only a few minutes’ drive from the Hotel Ristorante alPonte; even the town of Gradisca d’Isonzo is a little gem with countless surprises in store. 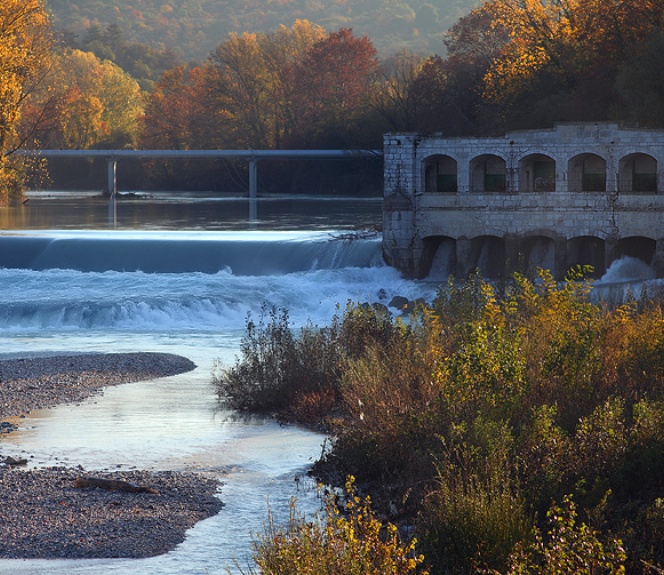 Trieste, Trst in Slovenian , Triest in German, Trieszt Hungarian capital of the province and the region of Friuli-Venezia Giulia, and more particularly the historical and geographical region of Venezia Giulia. It is the most populous and most densely populated in the region.
Trieste serves as a bridge between Western Europe and Central and South America, blending Mediterranean and European characters. It is an important railway and maritime transport. Its port, located in the heart of the European continent, was the main maritime outlet of the Hapsburg Empire. Today it is a hub for international trade flows between the land-sea markets of Central and Eastern Europe and Asia.
The city is located in the far north-eastern Italian, near the border with Slovenia, the northernmost part of the Northern Adriatic and facing the bay. The town is mainly occupied by a hillside that becomes a mountain, even in areas surrounding the village, situated at the foot of an imposing escarpment that comes down abruptly from the plateau of the Carso to the sea. The Karst mountain, close to the city, reach the altitude of 458 meters above sea level. The municipality of Trieste is divided into several climatic zones depending on the distance from the sea or altitude.
Below the city roads flowing streams coming from the plateau. A free flow of air time, since the city has developed, starting from the second half of the eighteenth century, were channeled into proper lines and still run through the underground of today’s Via Carducci (formerly by the Stream, in fact), via Battisti (formerly Lane Stadium), Viale XX Settembre (ex Aqueduct Avenue), via the Seven fountains or square between Rivi. South of the city flows the Rio Ospo that marks the geographical border with Istria [. Moreover, the current area of ​​the city between the railway station and the sea, “via Carducci” and Piazza della Borsa, the Theresian, was built in the eighteenth century after the burial of the previous saline order of Empress Maria Theresa of Austria .
The general climate exception day, a few years rare, some other more frequent, in which the so-called Bora blowing wind that wedges from the hinterland along the low passes that open in the mountains behind the city, to get off of Trieste and the Gulf. Although the air temperature by adiabatic compression descending on the city to warm up, however, three or four degrees, gusts greater increase in skin sensation of cold, even with relatively mild temperatures. Exceptionally the Bora blows for a short period in summer, sometimes raising temperatures even above 35 degrees. The gusts of air of continental origin from east-north-east at the mouth of the Adriatic buy additional speed and in exceptional cases in the open sea can reach 50 knots, as recorded in December 1996. In some areas the bora is stronger and more frequently than in others, and only the area of ​​the coast, from Miramare in Sistiana, is totally immune from the effect of the wind. Very interesting is the frequency pattern bora and easterly winds in general, that in the last 100 years has decreased by 28 days, while the south wind and southerly winds have increased in frequency of 18 days per year. Given the proximity of the finds, short rains can occur throughout the year (this is a distinction with respect to the typical Mediterranean climate), but during the summer months rainfall is still rare and mainly thunderstorms (July is usually the driest month ). The rainfall reached its peak in frequency and intensity in November and April, when normally falls latitude Atlantic disrupted the flow of currents.

Border town, this is the atmosphere in every corner of Gorizia. Here just really take a step to move from Italy to Slovenia.

Gorizia over the centuries has been influenced by various cultures of Europe, it was a true crossroads of peoples and traditions and it still bears the traces.
Walking through the city one can admire medieval architecture, baroque and nineteenth century, but the view is suddenly caught by the castle that dominates the city.
The Castle of Gorizia, dating back to the eleventh century, stands on a hill with a spectacular view of the city and surrounding landscape. Over the centuries it housed several masters and underwent several modifications to the original plan, also changing for different purposes. To date, the last reconstruction, which took place following the bombing of World War I, gives the structure a medieval aspect.

The city lies on the banks of a river, and is surrounded by a magnificent landscape. Near the river winds Park Feather, ideal place for trekking lovers or those who want to practice kayaking and canoeing. But there also were green spaces in the city center, many are in fact the public gardens and parks that are walking through the streets of downtown.

Culture lovers can visit the many museums, churches and buildings of the city, such as Palazzo Lantieri, the Fondazione Palazzo Coronini Cronberg, the Cathedral, the Synagogue, the Tower Palace or Palazzo Attems Petzenstein. In order to really get the city of Gorizia, you can not give to a stop in some restaurant or wine shop where you can taste the famous local wines and tasty local products such as honey, mushrooms, oil, and gibanica. The kitchen Gorizia is also the perfect synthesis of the traditional Friulian, Slovenian and Austrian.

The Italian front, affected by the Great War, extending for about 650 km and it was on the Isonzo who fought the toughest battles and bloody: eleven in the summer of 1915 to the summer of 1917.

In just the battles mentioned, Italy lost about 627,500 men in dead, wounded, missing and prisoners, the Austro-Hungarians about 489,500.

The two armies faced each other along a front stretching from the Bovec basin Sabotino the mountain that overlooks the hills in front of Gorizia; Isonzo flows between the two steep mountain slopes, forming an almost impassable obstacle. Here Italian and Austro-Hungarians fought for months, protected by entrenched lines that they had to adapt to the orography and the characteristics of the battlefield.

The Italian soldiers occupied Gradisca, and Monfalcone, is first attested in the trenches on the Karst Edge, a short distance from the Austro-Hungarian positions. The starting positions of the two armies dissanguarono with attacks and counterattacks which often led to the conquest of a few meters or new positions of little strategic importance.

Shrine of Redipuglia is the largest and most impressive among Italian military cemeteries. There are collected and stored the bodies of fallen approximately 100,000, of which 40,000 and 60,000 known unknown. It was officially opened by Benito Mussolini September 18, 1938. The monumental work is presented as a grand and ordered military deployment headed by his commanders. At the base of the stairs is the tomb of the Duke of Aosta, commander of the Third Army, flanked by those of his generals.

In front of the shrine, there is the St. Elias hill that was once the Cemetery of the Thirty Invitti of the Third Army, where the will of the Duke of Aosta, after the war, were entombed the remains of 30,000 fallen soldiers on the front of the Karst and Isonzo. Following the demise of the cemetery and the transfer of remains in the current one, has now become Sant’Elia Hill Memorial Park. Right next to the hill is the Museum of the Great War, in which there are important examples of the events that occurred here.

The Austro-Hungarian Fogliano Cemetery is located about one kilometer from Shrine Redipuglia and collect the bodies of 14,550 soldiers from various war cemeteries discharged. Campo Santo in an alley, surrounded by tall cypress trees, leads to the large common grave where lie 7,000 soldiers unknown.

Just behind the shrine we find the famous Mount Sei Busi, scene of fierce battles where you can still visit, kept in good condition, the so-called “trench” Italian, one of the many works that are present to witness the hard life of a soldier.

The Monte San Michele is one of the highest mountains of the karst area of ​​Gorizia, from this mountain Hungarian soldiers of the Division “Honved” controlled the Italian trenches below. After the capture of Gorizia and the shifting of the Austrian front, the caves were expanded and adapted to the needs of the Italian Army artillery here lined up several pieces of 149 mm.

At what today is called the “Area of ​​Battles”, where you can see both Italian and Austrian entrenched lines, there is a trench more difficult to occupy for the Italian troops, the branches of the Trench, located a short distance from Cippo Corridoni and characterized by an underground walkway that connects with the nearby Dolina dei Bersaglieri, called Dolina dei Cinquecento, which is a site of great historical interest because in it there are some remains of the ruins of masonry structures of what was a dressing advanced to the front line of San Martino.

Theme Park of the Great War can be accessed fortified sites valued by the Municipality of Monfalcone on the hills behind the town. Along the three tracks arranged, you can visit the many testimonies of the great battles that took place here.

The Museum of the Great War of Gorizia in the Castle of the city consists of 9 rooms created especially with regard to the reconstruction of life in the trenches, with photographic evidence of the city of Gorizia and the daily life of soldiers and civilians.

Town fortress built by the Venetians in 1593, is called the star-shaped city for its polygonal star with 9 points. Since 1960, a national monument.

History
In this climate of uncertainty and concern for the territorial integrity of Venice, the Senate decided to build a fortress, at a point close to the border with the Habsburgs, in a language of the territory between Udine and Marano (fortified cities in hand in Venice) wedged in Austria. Implementation of the project took part in a team of engineers, treatises, expert architects military fortifications belonging to the Office of Venice, including the Superintendent General Giulio Savorgnan, chief designer of the fortress. On 7 October 1593 the foundation stone was laid for the construction of the new fortress Marcantonio Barbaro and was appointed the first Superintendent General of Palma.

BOOKING ONLINE
Scroll to top
Cookies help us offering you quality services during your navigation. This site uses also third-party cookies. For more information or to refuse them, visit our Cookie Policy. Continued use of this site indicates that you accept this policy.OkMore Information